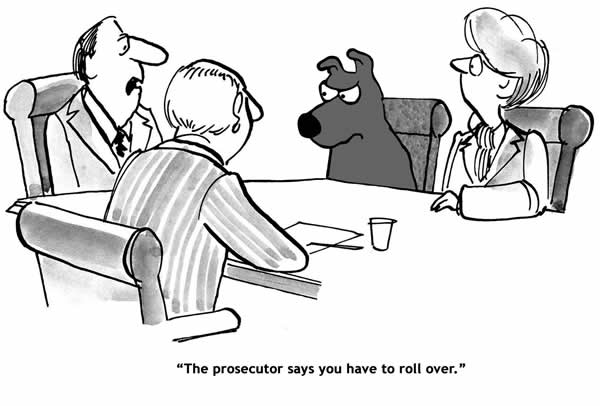 Most everyone knows that plea bargaining is a regular part of our criminal justice system.  It’s been estimated that about 95% of all felony conviction nationwide come by plea bargain rather than a jury trial.   In fact, without plea bargaining the court dockets would be overwhelmed and the system would get bogged down.

While on many occasions plea bargaining can work in the defendant’s favor and can result in the best possible sentence, there are times when it can go wrong.  For example, according to this Huffington Post article, a Wisconsin woman last week appeared in court with a plea bargain for second degree murder that would avoid almost any jail time. It was an unusual case because the 75 year-old woman named Ruby Klukow was charged with murdering her infant daughter more than 50 years earlier.  The plea agreement she reached called for her to serve 45 days in jail and probation.  The judge, however, thought that was far too lenient and rejected the plea bargain and sentenced Klukow to 10 years in prison. Even though the judge rejected the sentence the lawyers agreed to, Klukow was not allowed to withdraw her plea.

In New Hampshire if a plea bargain is reached and the judge believes the agreed-upon sentence is too lenient, the defendant has the right to withdraw the plea. The article discussed above demonstrates that not all states follow this rule. Additionally, federal courts rarely allow guilty pleas to be withdrawn and defendants who plead guilty rarely know the exact sentence they will receive.

Of great concern in the Klukow case is the apparent shady behavior of the prosecutor.  As a caveat it should be noted that the media does not always get it right, and there is no direct quote from the prosecutor in the story. Having said that, according to the article,  the prosecutor knew he would have a hard time winning at trial, “so he worked out a plea agreement calling for a lenient sentence knowing the judge would probably overrule him with a much tougher punishment.”  If so, this would be extremely unethical behavior in that 1. a prosecutor should only prosecute a case that he believes he can prove beyond a reasonable doubt; and 2. if a prosecutor makes a sentencing recommendation to a judge and/or to a defense lawyer, he should do so in good faith.

The Klukow case highlights the importance of having a seasoned criminal defense lawyer by your side if you have the misfortunate of being accused of a crime.  There are many dangers to navigate whether the case goes to trial or is resolved by a plea bargain.  Court practice and procedure can vary greatly by state-to-state and even county-to-county, so it pays to have a lawyer familiar with the specific judicial system in question.

Over the last several years even the United States Supreme Court, hardly a liberal bunch, has acknowledged the importance of plea bargaining by reversing several convictions when defendants did not have effective assistance of counsel when negotiating plea bargains.  The lesson is: plea bargaining should not be taken lightly, even when everything seems on track.